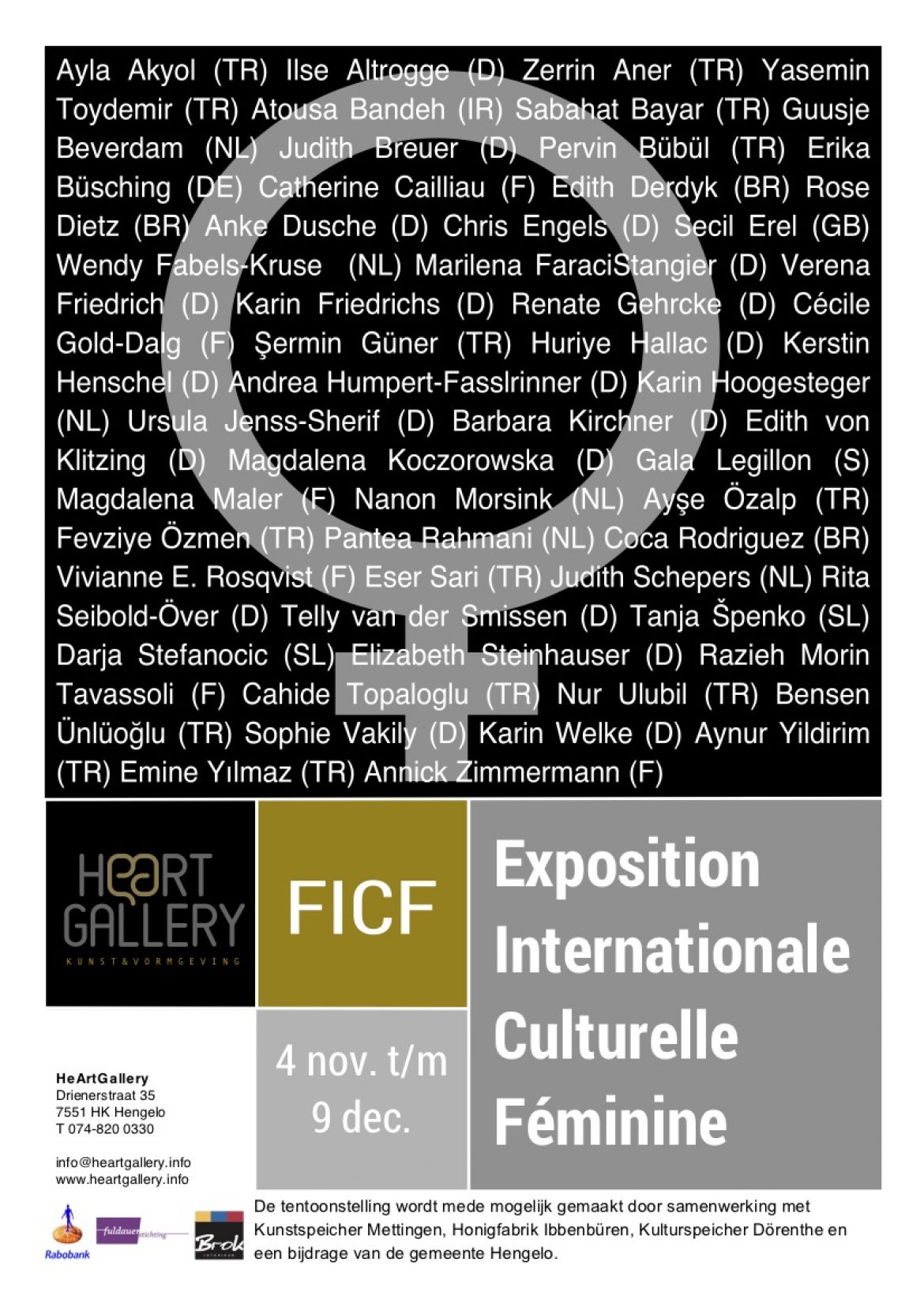 I was invited by FICF (Fédération internationale culturelle féminine) to join their international exhibition in Germany and Hengelo. Work from 61 female artists from 12 different countries is to be seen in HeartGallery, Hengelo. The opening on november 4 was a great succes.

The exhibition is to be seen until the 9.december 2018

On Sunday December 9 there will be a finissage, welcome! The HeArtpool Foundation has entered into a partnership this year with three ‘Kunstvereine’ from Ibbenbüren, Mettingen and Dörenthe. The first joint activity of this collaboration is an international exhibition of 61 women from 12 countries that first took place in Germany and can be seen from November 4 in HeArtgallery in Hengelo.

The art associations from Germany visited HeArtGallery and the art route in Hengelo last year. People were impressed by the location and the activities and it was agreed to see if there could be any further collaboration in the future. That invitation to cooperation came about earlier than expected. At the end of this year, at the invitation of the French organization Fédération Internationale Culturelle Féminine (FICF) and the German associations organize an international exhibition with art of women from many countries including France, Germany, Turkey, Slovenia and Iran. The board of the HeArtpool foundation has been asked to organize this project together with the three German partners. HeArtpool was also asked to nominate a number of artists from both the region and beyond. The FICF has made a selection. On behalf of the Netherlands, Karin Hoogesteger, Guusje Beverdam, Nanon Morsink, Wendy Fabels and Judith Schepers take part. In addition, HeArtpool invited artists from Iran, Slovenia and England. HeArtgallery has made its exhibition space available for the exhibition that could count on a financial contribution from the municipality of Hengelo.

Marijke van Hees, chairman of the Culture Council, made the opening in Hengelo. A Dutch department of the FICF is established during the opening. The women participating in this department are: Jeanette Lodeweges, Cobie Baart, Willemien Nijman, Judith Shepers and Karin Hoogesteger.

The collaboration will not be limited to this exhibition alone. Plans for the future to back and forth artists from Hengelo e.o. to exhibit in Germany and vice versa, are on the program. In addition to exhibitions, the collaboration between the StichtingHeArtpool and the German art associations will be further investigated. This includes, among other things, cross-border projects, lectures and connecting members.

On this page a few photographs of the opening on November 4.

A beautiful catalogue is publicized with the exhibitions.